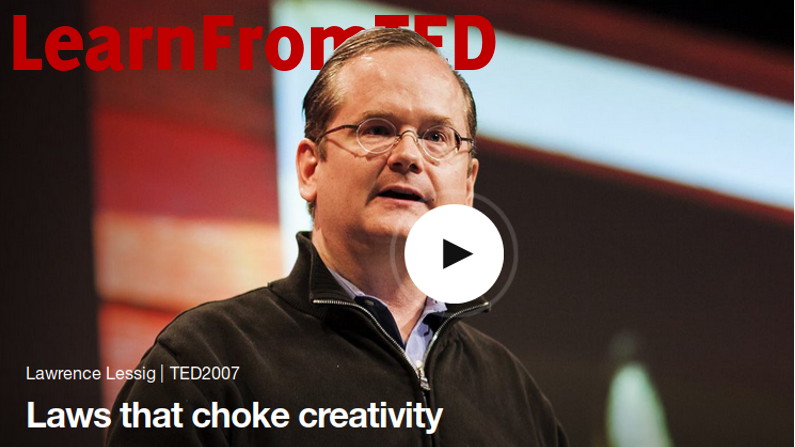 I often talk about Lawrence Lessig in my public speaking courses (I hope he’ll not sue me for that). He’s a great speaker and talks about interesting topics, in this episode of #LearnFromTED we’ll see storytelling and a creative approach to slides. The latter is one of the main reasons why I mention him and, where possible, I show his presentations. A good norm on visual aids is to prefer pictures in place of written information, and if you use text shouldn’t be the same words the presenter is using. Lessig is an example of how you can break the rule and still be very effective by using good slides creativity. Up to the point of calling it the Lessig Method (and so it is). So let’s see him in action at TED.

The talk is very interesting, with a logical flow, regardless if you share his point of view on copyright.

The Read-Write Read-Only is spot on and resonates well with a technical audience, which is also its limit (it may not work well with others).

Lessig has a point he wants to get across and it is explained and supported by three different stories.

As soon as the story is over Larry introduces without further ado the problem, and see how he does it explicitly calling for audience’s attention: “…Now, this is the picture I want you to focus on”.

Now, this is the picture I want you to focus on. This is a picture of culture. We could describe it using modern computer terminology as a kind of read-write culture. It’s a culture where people participate in the creation and the re-creation of their culture. In that sense, it’s read-write. Sousa’s fear was that we would lose that capacity because of these, quote, “infernal machines.” They would take it away. And in its place, we’d have the opposite of read-write culture, what we could call read-only culture. Culture where creativity was consumed but the consumer is not a creator. A culture which is top-down, owned, where the vocal chords of the millions have been lost.

Very effectively Lessig uses his voice to underline the most important passages and an anaphora too.

Never before in the history of human culture had it been as professionalized, never before as concentrated. Never before has creativity of the millions been as effectively displaced, and displaced because of these, quote, “infernal machines.”

The first stories has brought up the problem in the audience’s mind. It is an important step since the topic is abstract and not easily perceived by every one. People are less inclined to evaluate a solution to a problem that they consider minor or they even don’t see it.

If you have a solution to propose, make sure the public wants to solve its problem immediately!

Minute 2:44 beginning of the second story.

So, second. Land is a kind of property — it is property. It’s protected by law.

This one builds on the previous one adding a new idea: law should change along with how the world changes. What could be logic in the past may be common sense now. How better to explain it than bringing a real case which is almost illogical? At 4:10 the speaker pauses, not too long, where I suppose Lessig wanted the absurdity of the farmer’s request sink with the audience!

Later at 4:30 there is also a quip. Humour cannot harm, neither in this kind of presentations.

A little after the start of this TEDtalk third story. These three stories are logically and chronologically ordered.

Finally. Before the Internet, the last great terror to rain down on the content industry was a terror created by this technology. Broadcasting: a new way to spread content, and therefore a new battle over the control of the businesses that would spread content.

With the broadcasting rights story Larry brings in the idea of how the public is willing to turn the page if given the possibility (as happened with BMI).

At around 7:05 it’s time to introduce the message he wants the audience to bring home, Lessig does it explicitly.

The stories were not just a prologue, they are referenced and used to support his message. Like here for example.

For when you think of what Sousa romanticized in the young people together, singing the songs of the day, of the old songs, you should recognize what your kids are doing right now.

Notice that “your kids” always has an impact on the audience (consider also the TED attendants). They will be mentioned again later, at around 12:25.

This is how our kids speak. It is how our kids think. It is what your kids are as they increasingly understand digital technologies and their relationship to themselves.

“it is what your kids are” is also amplified by the voice. I highlight that the reference to the kids is perfectly suited to the argument and is not inserted to cheaply conquer the audience’s favour.

Finally at 15:40 the third story is also recalled.

So, we need something different, we need a different kind of solution. And the solution here, in my view, is a private solution, a solution that looks to legalize what it is to be young again, and to realize the economic potential of that, and that’s where the story of BMI becomes relevant. Because, as BMI demonstrated, competition here can achieve some form of balance. The same thing can happen now.

Three stories to successfully bring a point home! Three stories interlaced that help the public understand the logical and cultural issues behind the concept explained by Lessig. Three stories that help visualise the political-cultural problem we have and the proposed solution.

Could he achieved it without the stories? Yes. Would have been so effective? I doubt it. When appropriate try to use storytelling yourself.

Visualisation is also helped by the particular design and usage of visual aids. They are uncommon but typical of Lawrence Lessig.

The first thing to notice is that bullet points and templates are missing, and that’s a good thing. Only text, not much, white on black or black on white, occasionally red or pictures. Text that is a bit little with a typeface font (very Lessig), nice with an average readability (I believe it is P22 Typewriter). It could be better, as I could improve myself that I always use Delicious, a slightly thin type.

Look how effective is the three pictures sequence (from 00:20 to 00:30) and how they support the narration.

This man, John Philip Sousa, traveled to this place, the United States Capitol, to talk about this technology, what he called the, quote, “talking machines.”

Who, where and what.

Later on the text on screen is read, which is easily understood by the public as a problem (or a danger). This red is a bit dark and doesn’t contrast well with the background. It may have been better to use a brighter one. In any case it renders the idea behind and captures attention with its discontinuity.

From 1:20 we fully see the Lessig Method with words on screen that support the speech.

At 1:45 the mirror image of RW (followed by RO) is nice, albeit a little technical.

Notice the emotional impact of the map at 2:35, how it dims slowly. How well it conveys the disappearance of culture creation.

Little details are part of a great presentation. At 3:00 the text is on the field (lower limit of property) and then in the sky (upper limit).

Using the Lessig Method doesn’t mean to give up traditional diagram when those are the most apt to represent a concept. So at 5:40 we have a chart on cost increase.

It is followed by several visual aids, I suggest you to look at the clever use of words, graphical elements like “” or <> and symbols. Take the No Entry sign that every one grasps immediately. This is how slides should be in this kind of presentations. If they were not easy to read, audience’s attention would be dissipated on the screen and not on the speaker, where it should be.

Final observation on the video examples at 8:30. They are pleasant and entertaining, they provide a rhythm change for the talk and most of all they visually show what is the remix culture. Whenever possible it’s best to let the audience experience first-hand something rather than describing it with words.

Few advices if you would like to use the Lessig Method

If you believe the Lessig Method can work for you and add some creativity to you slides I encourage you to give it a try (I did it more than once). Here are some suggestions you may find useful:

Lawrence Lessig not only gave us Creative Commons, cultural battles of great value and the Lessig Method for visual aids. If you want to improve your public speaking skills he’s an extraordinary example of how to render legal topics, normally not easy to comprehend and difficult to warn up to, interesting and passionate for the public.