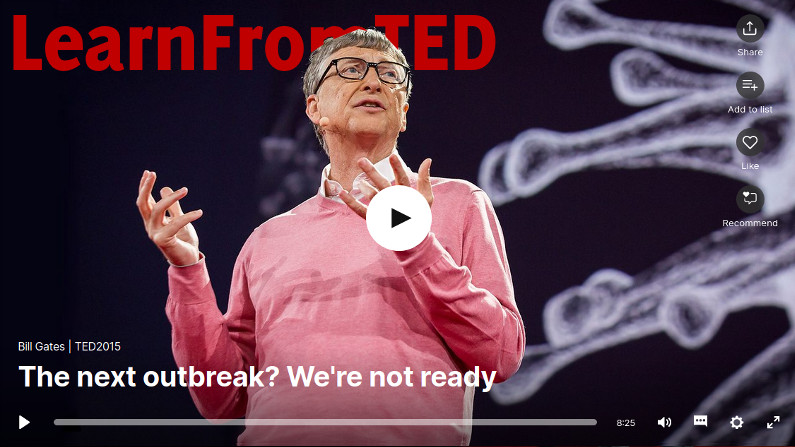 This #LearnFromTED is bittersweet since it covers a sad prediction that fell on death ears. Nonetheless it’s a good TED Talk and not only because history proved its foresight. The speaker is Bill Gates, and he wants to raise an issue. He talks about how we are not prepared for a pandemic crisis, and what we should do to be ready to face it (at the time of writing this the coronavirus covid-19 is spreading globally). I suggest you to watch the whole presentation on the TED site or simply here.

Bill Gates walks in pushing a barrel. A great idea, the stage prop captures audience attention and help them focus on the story that is coming.

When I was a kid, the disaster we worried about most was a nuclear war. That’s why we had a barrel like this down in our basement, filled with cans of food and water. When the nuclear attack came, we were supposed to go downstairs, hunker down, and eat out of that barrel.

This is not entertainment for the sake of it, the barrel is instrumental for the story which in turn is the premise of the whole talk. Time ago the greatest danger to humanity was a nuclear war, today it is no longer so: there is something else that should worry you much more. To give a sense of gravity, Gates uses an easy-to-understand reference for the audience: nuclear attack terror. For years this was the major concern of humanity.

He follows it up and strengthens it by the comparison between the two images; as for the barrel, there is the use of visualization to increase the impact of communication.

Contrast is an effective way to create emotions in the audience, and this works very well both visually and conceptually.

To raise an issue is not enough to appeal to the logical side of it, you need also the emotional part, pictures and words are very important and Gates finish his opening part with an emphatic passage.

If anything kills over 10 million people in the next few decades, it’s most likely to be a highly infectious virus rather than a war. Not missiles, but microbes. Now, part of the reason for this is that we’ve invested a huge amount in nuclear deterrents. But we’ve actually invested very little in a system to stop an epidemic. We’re not ready for the next epidemic.

Note the strength of If anything kills over 10 million people and the repeated parallels like Not missiles, but microbes.

The last sentence is the core message of this TED talk. It’s a good thing to deliver it to the public in a clear and simple way

From the minute 1:11 begins the central part of the speech, the body, where Bill argues and supports the just stated central message. In this section there is a parallel between the fight against epidemics and the military sector, which resonate with the opening one between microbes and bombs. His presentation of the problem has well-designed visual aids with colours that are congruous to the message he wants to convey. Notice in particular, the use of red that greatly stands out on slides in shades of grey.

When Gates has made his point about the risk and explained why we are unprepared, he can now move on to the proposed solution, which happens from the minute 4:55.

But in fact, we can build a really good response system. We have the benefits of all the science and technology that we talk about here.

Once more Bill goes on with the parallel with military, that is supported by words and visual (note the absence of red now).

The best lessons, I think, on how to get prepared are again, what we do for war.

As well explained by classical rhetoric, a good speech must anticipate the public’s objections and refute them. Clearly the main one is the cost of the operations.

Now I don’t have an exact budget for what this would cost, but I’m quite sure it’s very modest compared to the potential harm. The World Bank estimates that if we have a worldwide flu epidemic, global wealth will go down by over three trillion dollars and we’d have millions and millions of deaths.

The objection is reverted: what is the cost of not doing it? Way bigger, and to make his point stand stronger the astonishing number is on the screen. Note the impact of the extended representation, compared for example to $3T.

The counter-objection is “OK, but that’s true only if a pandemic hits us, what if nothing happens and we are lucky?”. Once again audience concern is anticipated and the immediately following passage addresses it.

These investments offer significant benefits beyond just being ready for the epidemic. The primary healthcare, the R&D, those things would reduce global health equity and make the world more just as well as more safe.

At 7:47 it’s time for the closing. He wanted to raise an issue, to make people aware of the risk. The problem raised is not to scare people. Rather is to persuade the audience of the importance of acting now to be prepared.

So I think this should absolutely be a priority. There’s no need to panic. We don’t have to hoard cans of spaghetti or go down into the basement. But we need to get going, because time is not on our side.

Note the the spaghetti reference that relates to the barrel he brought on stage at the beginning of the talk. It’s always nice if you can close the circle and in the closing recall the opening.

The last statement is a positive one and that is how it should be, unless there is a really strong reason to close on a negative note.

If we start now, we can be ready for the next epidemic.

Positive, but it begins with an If, that’s the key to motivate the audience towards an action.

The actual situation today unfortunately speaks more about the deaf ears of who should be in charge of this. Gates objective to raise an issue was accomplished albeit unheard. It’s a great speech where you can learn a lot for your own presentations.