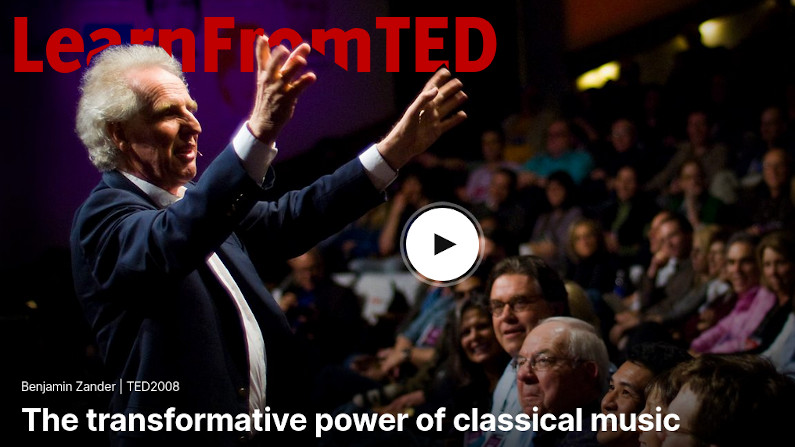 This #LearnFromTED episode is different from the usual ones, featuring Benjamin (Ben) Zander from his talk of 2008. You are going to learn from him how to make beautiful presentations, while getting treated to some classical music (doesn’t do any harm).

As usual let’s go straight to the video, I prompt you to watch it right now.

Open with a story

You noticed it immediately: the first 25 seconds are about a story. A funny one, that works well to introduce the topic.

Probably a lot of you know the story of the two salesmen who went down to Africa in the 1900s. They were sent down to find if there was any opportunity for selling shoes, and they wrote telegrams back to Manchester. And one of them wrote, “Situation hopeless. Stop. They don’t wear shoes.” And the other one wrote, “Glorious opportunity. They don’t have any shoes yet.”

Do you normally open with a story? Which one could you use that it is related to the subject of your presentations? Has some humour in it?

After a minute from the beginning there is an analogy with a child studying piano. This time Zander doesn’t just tell the story, he sits at the piano and let the audience experience it. Not much later this is also setting the bases for the one-buttock idea.

You know, a gentleman was once watching a presentation I was doing, when I was working with a young pianist. He was the president of a corporation in Ohio. I was working with this young pianist, and said, “The trouble with you is you’re a two-buttock player. You should be a one-buttock player.” I moved his body while he was playing. And suddenly, the music took off. It took flight. The audience gasped when they heard the difference. Then I got a letter from this gentleman. He said, “I was so moved. I went back and I transformed my entire company into a one-buttock company.”

Best thing you can do is to move the audience in active role. Listening to the child playing is a sensorial experience and is involving the public.

Five minutes later there’s another experience, this time is a Chopin piece, with a spectacular mix of music and explanation.

The whole talk is dotted with quips. You can count 25 laughter in just 15 minutes, despite this is not a stand-up comedian show. But humour is good for the audience and is good for the speaker, because people are to listen to him more.

people who never listen to classical music. It’s just simply not part of your life. You might hear it like second-hand smoke at the airport …

Imagine if Martin Luther King had said, “I have a dream. Of course, I’m not sure they’ll be up to it.”

Those are just a couple of lines you heard during the talk. Have you noticed that the last two minutes have no laughter…

Close with your message

Conclusion is Zander’s message: the possibilities offered by classical music and at the same time the ocean of possibilities we should explore. These world of opportunities echoes the opening story, like closing the circle.

So now, I have one last thought, which is that it really makes a difference what we say — the words that come out of our mouth. I learned this from a woman who survived Auschwitz, one of the rare survivors. She went to Auschwitz when she was 15 years old. And … And her brother was eight, and the parents were lost. And she told me this, she said, “We were in the train going to Auschwitz, and I looked down and saw my brother’s shoes were missing. I said, ‘Why are you so stupid, can’t you keep your things together for goodness’ sake?’” The way an elder sister might speak to a younger brother. Unfortunately, it was the last thing she ever said to him, because she never saw him again. He did not survive. And so when she came out of Auschwitz, she made a vow. She told me this. She said, “I walked out of Auschwitz into life and I made a vow. And the vow was, “I will never say anything that couldn’t stand as the last thing I ever say.” Now, can we do that? No. And we’ll make ourselves wrong and others wrong. But it is a possibility to live into.

The art of possibility (and the art of public speaking).