3 ways to build a happy marriage 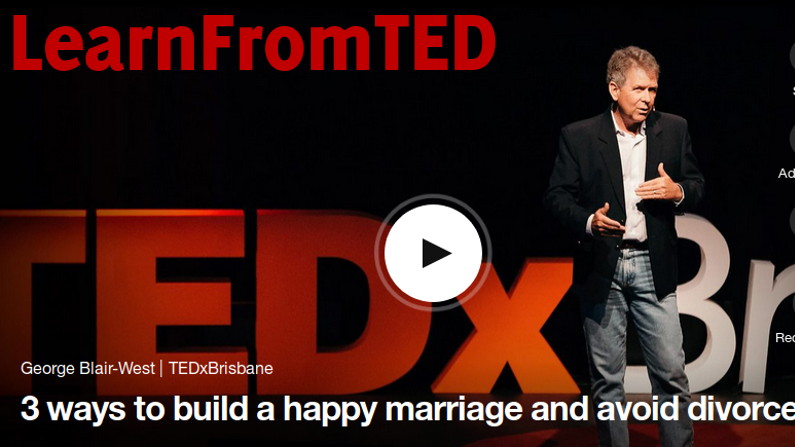 #LearnFromTED is back thanks to George Blair-West who’s giving some advice on happy marriage, it’s also a good chance to pick up some public speaking tips!

I encourage you to watch the video and try to write down your own observations, which you can also share in the comments here.

The opening is a humoristic one:

Almost 50 years ago, psychiatrists Richard Rahe and Thomas Holmes developed an inventory of the most distressing human experiences that we could have. Number one on the list? Death of a spouse. Number two, divorce. Three, marital separation. Now, generally, but not always, for those three to occur, we need what comes in number seven on the list, which is marriage.

Albeit a funny quip at the beginning is almost a cliché it does work, since by making people laugh you make them focused on listening!

Just after that Blair-West uses a parallel to introduce an idea by stating something familiar with the audience:

So in a modern society, we know that prevention is better than cure. We vaccinate against polio, diphtheria, tetanus, whooping cough, measles. We have awareness campaigns for melanoma, stroke, diabetes — all important campaigns. But none of those conditions come close to affecting 45 percent of us. Forty-five percent: that’s our current divorce rate. Why no prevention campaign for divorce?

Note how well it works starting from a concept that is well known to the public, the use of vaccines to prevent a problem, to create the strident issue that little is done to avoid divorces. In your presentations if you can also build parallels with situations already evident to the audience, you can introduce new ideas more effectively.

A happy marriage is the topic of the talk and the speaker is offering us three important advices:

So for those of you who want to embrace the post- “romantic destiny” era with me, let me talk about my three life hacks for preventing divorce.

Using numbers is a great way to keep interest and attention. The lists are intriguing and unconsciously we have the desire to check if we know all the elements, or if we would have come up with a different list. Cleverly George will count each advice as he states it, so that the public can follow the list better.

The same thing, the numbered list, is also inside the first life-hack:

Why? Why is it helpful to get married later? Three reasons.

Have you noted anything about his delivery? I have observed the walking, perhaps it depends on the nervous tension of being on a stage in front of a large audience. But the voice is calm and the rhythm is relaxed as befits the topic and the speaker.

A final point I would like to make is about his way of anticipating objections. When you present a new idea, maybe slightly radical, you can expect the audience to have doubts and perhaps biases. Don’t avoid them! What you should do is bring them out and confute them as Blair-West is doing more than once. This the most evident passage:

Well, I think it’s because our policymakers don’t believe that things like attraction and the way relationships are built is changeable or educable. Why? Well, our policymakers currently are Generation X. They’re in their 30s to 50s. And when I’m talking to these guys about these issues, I see their eyes glaze over, and I can see them thinking, “Doesn’t this crazy psychiatrist get it? You can’t control the way in which people attract other people and build relationships.” Not so, our dear millennials. This is the most information-connected, analytical and skeptical generation, making the most informed decisions of any generation before them. And when I talk to millennials, I get a very different reaction. They actually want to hear about this. They want to know about how do we have relationships that last?

To sum it up it is a good speech on how to lead a happy marriage, but also a good talk to get some ideas on how to organize a presentation to the public.