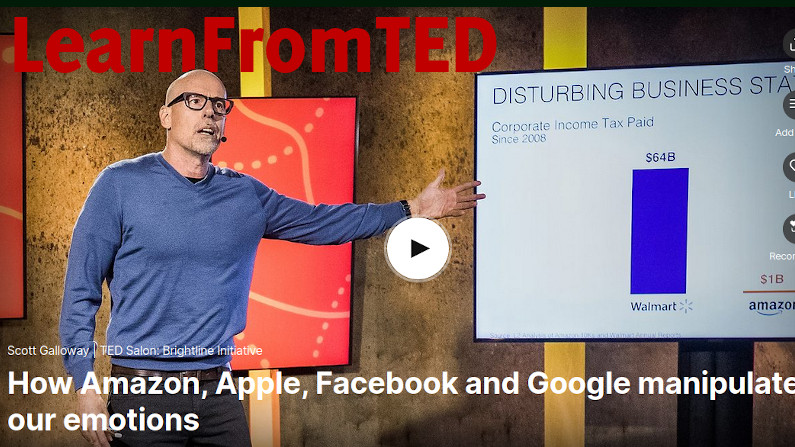 I love many things about Scott Galloway’s presentations: his style, the way of representing the data, the humour and very often the ideas. Normally his are tough presentations and in this #LearnFromTED we see him in action at the TED Salon: Brightline Initiative in October 2017. As always in this series, we use the talk as a starting point to extract lessons on public speaking.

I recommend that you see Scott’s talk in full below and then proceed with the analysis.

As is often the case at TED, the opening is impactful, skipping presentations (speaker have already been introduced by the presenter, I suppose Chris Anderson).

So, this is the first and the last slide each of my 6,400 students over the last 15 years has seen.

Notice how Scott immediately captures the attention of the audience (first and last … which will it be?), while contributing to the authority of the speaker (6400 students).

At the beginning of a presentation it is important to grab the interest of the audience, if you can do it in the first sentence even better!

In reality, the first part of the talk is a deliberately disturbing analogy between religion and a new God (Google).

What is prayer? Sending a query into the universe, and hopefully there’s some sort of divine intervention — we don’t need to understand what’s going on — from an all-knowing, all-seeing superbeing that gives us authority that this is the right answer. “Will my kid be all right?” You have your planet of stuff, you have your planet of work, you have your planet of friends. If you have kids, you know that once something comes off the rails with your kids, everything melts, in your universe to the Sun that is your kids. “Will my kid be all right?” “Symptoms and treatment of croup” in the Google query box. One in six queries presented to Google have never been asked before in the history of mankind. What priest, teacher, rabbi, scholar, mentor, boss has so much credibility that one in six questions posed to that person have never been asked before?

It is not the only analogy of the presentation, the more general one can be glimpsed with the second slide (or the appearance of the second logo on the first slide).

It is easy to see how the 4 big digital companies (over the top) turn to our 4 decision-making centres, even if at this point in the talk Amazon and Apple have not yet appeared.

Going back for a moment on the first part, I want you to observe how effective it is to emotionally involve the public immediately. Anyone who has children finds himself there, and it is not difficult to imagine it, even for those who have none. If you tell stories where the listener can identify himself, you will be more effective!

At that point Scott isn’t afraid to use powerful statements, and even then people in the audience can imagine themselves and share Galloway’s thoughts (or not).

Google is our modern man’s God. Imagine your face and your name above everything you’ve put into that box, and you’re going to realize you trust Google more than any entity in your history.

I told you that we were looking at one of his tough presentations!

Later on he talks about longevity factors.

However, the best signal that you might make it to be part of the number-one fastest growing demographic in the world — centenarians, people who live to triple digits — there are three signals. In reverse order:

The inverse order is the most logical for at least two reasons. Once again the interest, the suspense. Rankings are often made to go up for this reason. Secondly consider that the factor in the third place is what many would expect to be in first place.

your genetics — not as important as you’d like to think, so you can continue to treat your body like shit and think, “Oh, Uncle Joe lived to 95, the die have been cast.”

If you surprise your audience with information they don’t have, or even better with counter-intuitive ones, they will be more willing to listen to you. Mind the risk that they may be perceived as not true. The public could doubt it, stick with their own idea and at this point lower the credibility of the other ideas exposed as well. Here Galloway is potentially open to criticism: who said genetics isn’t in the first place? I don’t doubt that, but if he had cited an authoritative source for this list it would have been better.

The last of the four companies comes with a bit of humour.

This is not a timepiece. I haven’t wound it in five years. It’s my vain attempt to say to people, “If you mate with me, your children are more likely to survive than if you mate with someone wearing a Swatch watch.”

Notice how the quio is not an end in itself, but just an exasperation of the concept Scott wants to convey. Humour is another great weapon for grabbing the audience’s attention, and that’s what the speaker has done so far. This concludes the opening of the talk which served to introduce the theme of the power of the 4 digital giants ,and to ensure that the people in the room have their ears open for the main thesis that will be exposed.

Data with an impact (and pause at the right moment)

In the central body of the presentation it is important to support one’s thesis with solid and objective arguments. We must not forget the emotional part, far from it, just give it the rational support it needs.

Scott does this both with precise references and citing impactful data.

I appreciated the animation of the countries that are overcome over the years, personally I would have accompanied it with a silence from the speaker to give more prominence to it.

Then we can see an immediate graphic representation of the problem.

Followed by the description of the problem (and darker humour this time).

This step is not negligible, and it is important to remember it. When we present an idea we need to help the audience visualize the consequences, even when we think they can get there on their own. It serves as a reinforcement and gives them the opportunity to digest them better and with more time.

Note the pause right after the transition at approximately 6:35 am. It is the first big pause since the beginning of the talk and serves to land the size and gravity of the problem.

Whose fault is it? It’s our fault.

Galloway keeps the audience involved all along the presentation.

The inadequacy of the current model is presented by juxtaposing figures and analogies.

And the EU says, “I feel lied to. We’re fining you 120 [million] dollars,” about .6 percent of the acquisition price of 19 billion dollars. If Mark Zuckerberg could take out an insurance policy that the acquisition would go through for .6 percent, wouldn’t he do it?

Anticompetitive behavior. A two-and-a-half-billion-dollar fine, three billion of the cash flow, three percent of the cash on Google’s balance sheet. We are telling these companies, “The smart thing to do, the shareholder-driven thing to do, is to lie and to cheat.” We are issuing 25-cent parking tickets on a meter that costs 100 dollars an hour.

In addition to impactful data, there is no shortage of impactful phrases.

Humour helps to keep this central part smoother, perhaps at the expense of the finesse of the language 🙂

I am not allowed to be political or use curse words, or talk about religion in class, so I can definitely not say, “Zuckerberg has become Putin’s bitch.” I definitely cannot say that.

The final section of the talk begins at about 13:00 after the joke about the Amazon acquisition. Here Scott resorts to a little personal storytelling.

One hundred thousand people came together for the Manhattan Project and literally saved the world. Technology saved the world. My mother was a four-year-old Jew living in London at the outset of the war. If we had not won the footrace towards splitting the atom, would she have survived? It’s unlikely. Twenty-five years later, the most impressive accomplishment, arguably, ever in all of humankind: put a man on the moon. Four hundred thirty thousand Canadians, British and Americans came together, again, with very basic technology, and put a man on the moon.

Now we have the 700,000 best and brightest, and these are the best and brightest from the four corners of the earth. They are literally playing with lasers relative to slingshots, relative to the squirt gun. They have the GDP of India to work at. And after studying these companies for 10 years, I know what their mission is. Is it to organize the world’s information? Is it to connect us? Is it to create greater comity of man? It isn’t. I know why we have brought together — I know that the greatest collection of IQ capital and creativity, that their sole mission is: to sell another fucking Nissan.

Definitely a strong closing in line with the rest of the presentation. I assume his intention was to increase the consideration of the problem, and in that case I believe he succeeded.

I add a personal consideration, I would have added something at the end to call the audience for an action: “The next time you evaluate a candidate, ask him what his policy is on these issues!”. But I don’t know if that’s what Galloway wanted to achieve.